Back to Berkshire and The War, The Reading Standard, Volume 4 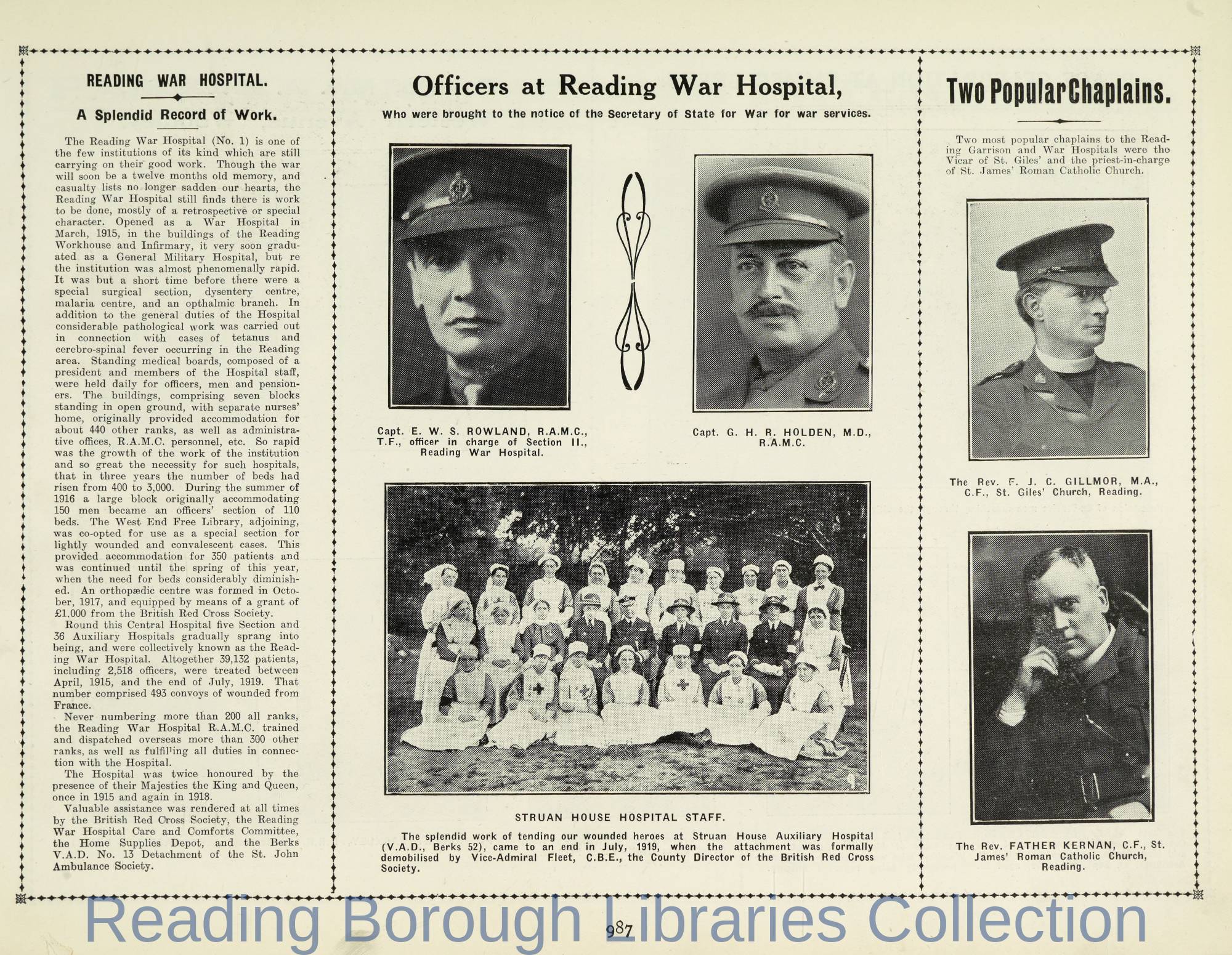 Every effort has been made to trace copyright holders, obtain permission from them and to ensure that all credits are correct. The Reading Borough Libraries have acted in good faith at all times and on the best information available to us at the time of publication. We apologise for any inadvertent omissions, which will be corrected as soon as possible if notification is given to us in writing.

In the event you are the owner of the copyright in any of the material on this website and do not consent to the use of your material in accordance with the terms of conditions of use of this website, please contact us at info@readinglibraries.org.uk and we will withdraw your material from our website forthwith on receipt of your contact details, written objection and proof of ownership.

There are no related entities. 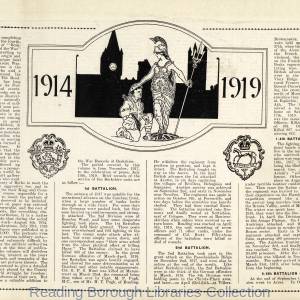 Berkshire and The War, The Reading Standard, Volume 4

A Splendid Record of Work.

The Reading War Hospital (No. 1) is one of the few institutions of its kind which are still carrying on their good work. Though the war will soon be a twelve months old memory, and casualty lists no longer sadden our hearts, the Reading War Hospital still finds there is work to be done, mostly of a retrospective or special character. Opened as a War Hospital in March, 1915, in the buildings of the Reading Workhouse and Infirmary, it very soon graduated as a General Military Hospital, but re the institution was almost phenomenally rapid [sic]. It was but a short time before there were a special surgical section, dysentery centre, malaria centre, and an opthalmic branch. In addition to the general duties of the Hospital considerable pathological work was carried out in connection with cases of tetanus and cerebro-spinal fever occurring in the Reading area. Standing medical boards, composed of a president and members of the Hospital staff, were held daily for officers, men and pensioners. The buildings, comprising seven blocks standing in open ground, with separate nurses' home, originally provided accommodation for about 440 other ranks, as well as administrative offices, R.A.M.C. personnel, etc. So rapid was the growth of the work of the institution and so great the necessity for such hospitals, that in three years the number of beds had risen from 400 to 3,000. During the summer of 1916 a large block originally accommodating 150 men became an officers' section of 110 beds. The West End Free Library, adjoining, was co-opted for use as a special section for lightly wounded and convalescent cases. This provided accommodation for 350 patients and was continued until the spring of this year, when the need for beds considerably diminished. An orthopaedic centre was formed in October, 1917, and equipped by means of a grant of £1,000 from the British Red Cross Society. Round this Central Hospital five Section and 36 Auxiliary Hospitals gradually sprang into being, and were collectively known as the Reading War Hospital. Altogether 39,132 patients, including 2,518 officers, were treated between April, 1915, and the end of July, 1919. That number comprised 493 convoys of wounded from France.

Never numbering more than 200 all ranks, the Reading War Hospital R.A.M.C. trained and dispatched overseas more than 300 other ranks, as well as fulfilling all duties in connection with the Hospital.

The Hospital was twice honoured by the presence of their Majesties the King and Queen, once in 1915 and again in 1918.

Valuable assistance was rendered at all times by the British Red Cross Society, the Reading War Hospital Care and Comforts Committee, the Home Supplies Depot, and the Berks V.A.D. No. 13 Detachment of the St. John Ambulance Society.

Officers at Reading War Hospital.
Who were brought to the notice of the Secretary of State for War for war services.

The splendid work of tending our wounded heroes at Struan House Auxiliary Hospital (V.A.D., Berks 52), came to an end in July, 1919, when the attachment was formally demobilised by Vice-Admiral Fleet, C.B.E., the County Director of the British Red Cross Society.

Two most popular chaplains to the Reading Garrison and War Hospitals were the Vicar of St. Giles' and the priest-in-charge o f St. James' Roman Catholic Church.